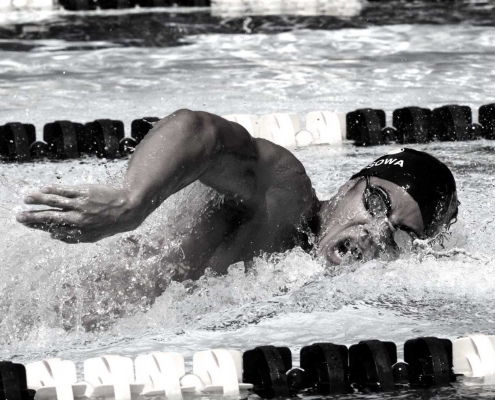 One summer evening in 1954, a small group of resolute families met in a North Arlington living room. They wanted to create a neighborhood swimming pool, a place that the whole family could go to relax and enjoy the summer. From that simple idea, the Tuckahoe Recreation Club has grown to over 3,000 members, with four pools, six tennis courts, a miniature golf course, a modern snack bar, and a picnic area. Yet even with all the growth, the club has remained loyal to its founding principle: Tuckahoe is a family facility, renowned throughout Northern Virginia for its close-knit communal atmosphere.

Ten people attended that first meeting, and it was decided that a pool would be developed. “We grew tired of going all the way to Glen Echo or Chesapeake beach and decided we needed a local pool to take our kids to,” said Pauline Greenwood, one of Tuckahoe’s founding members.

Another founding member, Wilber Sparks remembers “walking over the property that became the Club, and deciding that it would ‘do’.” Each of the founding group put up $50 to take care of early expenses. The group spent a lot of time, including most weekends, trying to convince prospective members that we really would have a pool there!

More of Wilber’s memories: “Most of the original group lived in nearby North Arlington, the children attended Tuckahoe School, and we even held some early meetings at the school. That is why the Club was named Tuckahoe. As an early president and program chairman, I helped to start the TRC swim team, whose early members received homemade ribbons and certificates. With members of seven other Northern Virginia clubs, we began the Northern Virginia Swim League.”

“I am very proud of my part in creating and being an early leader of the Club. I will always be impressed with its progress.” Out of that core circle grew a diverse collection of community talent, from architects to lawyers to engineers, who all donated their time. Getting the pool built was “as much determination as it was vision,” said Wilbur Sparks, another founding member who volunteered long hours to the Tuckahoe project. “We had endless meetings, usually once or twice a week, that went on and on into the night.” The first public gatherings were held at Tuckahoe Elementary School and garnered neighborhood support and revenue for the project, as well as a name for the pool.

After unsuccessful efforts to purchase land close to their community (one potential tract now serves as part of Rte. 66), the founding members ventured further out into what was the “the sticks” of McLean and stumbled upon a heavily wooded seven and one-half acre lot for sale. The group then canvassed some 100 families who lived within a one mile radius of the property to ensure their support. Permission was granted by the county zoning board, the land was purchased, and the digging began.

Concern then turned to recruiting members. While bulldozers were digging the land in the background, a card table was set up on the property to enlist members. Any fear of getting enough people to join was soon alleviated, as 150 families paid an initial fee of $50 to cover four years of membership. “There was no other place to swim at the time,” noted Sparks, and people were all too willing to join the neighborhood facility.

On July 4, 1955, after a year of hard work and perseverance, the Tuckahoe Recreation Club opened its swimming pool, one of the first of its kind in the area. Still, accommodations were a bit on the sparse side. A bath house had yet to be built, and with mud everywhere on the site, wash tubs were strategically located every three or four feet around the pool’s concrete deck so that members could wash off their feet before taking a dip. “There was so much mud around that pool,” exclaimed Sparks, “that the tubs had to be rinsed out at least every 30 minutes.” Nevertheless, the season was a smashing success, and Tuckahoe was on its way.
The success of the pool has allowed for continuous improvement and growth. Within a year, a bathhouse was constructed, and dues were collected to expand the concrete deck and develop a parking lot. By 1957 hot water was obtained, and in 1958 flood lights were placed around the pool. By 1964 a snack bar was in place, along with a concrete patio and miniature golf course. In 1968 a second pool and four tennis courts were built, and by the fall of 1969 the new pool was enclosed for year round swimming, along with an exercise room, whirlpool, steam room and saunas. With this growth came competitive swimming, diving, and tennis programs.

Other additions to the facility came in rapid order: Tennis courts 5-6 completed and ready for use in June 1985; new locker rooms in the winter building in November 1986 just before Thanksgiving (many of us remember the 100 yard dash from the summer bathhouse to the winter building in the cold of October and early November.. brisk to say the least!); and the “other side” containing the fitness center, spa, steam room and saunas, and the new, enlarged office (What a blessing that was!) in March of 1987.

Then in 1997 the new summer bathhouse was completed, giving Tuckahoe a great new facility for its summer snack bar; changing rooms, showers, and lockers; and room for first aid and lifeguard needs. While the winter facility is tucked behind the hills where our tennis courts are located, the summer bathhouse is visible from Great Falls Street, welcoming all who turn into the club.
The commitment that led the first group of families to create a neighborhood pool 40 years ago is still evident. Current members cite the club’s family atmosphere and closeness. Cindy Dobyns, our past president sums it up nicely, ” I grew up swimming at Tuckahoe, and I still see people I’ve known since I was seven. It’s a unique club in this area, and my husband, kids, and I enjoy spending a lot of time there. It is a fun place where we can exercise, relax, and socialize with friends. Tuckahoe has something for everyone!”

Today, Tuckahoe continues to develop. Our management is already looking to the future growth and needs of the club with its long-range planning. Every effort is made to maintain the facility to the highest possible standards, to anticipate the needs of its physical plant, to plan for growth, and to meet the changing needs and interests of its members.

Tuckahoe’s future promises to be just as bright as its past. With over 3,000 members, a professional operating staff, and a hard-working (volunteer) board of directors, there is demand for– and a commitment to– year-round fun and fitness. Tuckahoe continues to offer a host of programs for competitive swimming, diving, and tennis; lessons in swimming, scuba, tennis, yoga, etc.; and a variety of seasonal member events. Its year round programs, family atmosphere, and competitive prices continue to make it a unique recreation club serving mainly the communities of McLean, Falls Church, Arlington, Vienna, and Great Falls.

Come be a part of our future!

Written by Jacqueline Morgan for our 40th Birthday, appended in April 1999 by Marilyn Lowrance and in October 1999 by Betty Griffin. Additional comments supplied in 2002 by Wilber Sparks (membership number 5!) in his resignation letter in 2002.